Home » About Us » Meet the Team » Mr Christopher Reeks 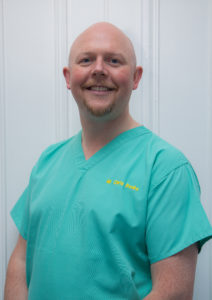 Chris graduated from the University of Glasgow with a Bachelor of Dental Surgery in 1996. After holding posts in Teesside and West Yorkshire, Chris settled in Aberdeenshire and completed his diploma of Membership of the Faculty of General Dental Practice of the Royal College of Surgeons of England in 2006.

From 2006 to 2013, he was the Divisional Tutor for the North of Scotland for the Membership of the Joint Dental Faculties of the Royal College of Surgeons of England, assisting local practitioners with their postgraduate development.

In 2013, alongside his work in General Dental Practice, Chris became a clinical lecturer in restorative dentistry at the University of Aberdeen Dental School and Hospital, with his main focus on periodontal teaching and assessment.

In 2016, Chris completed his Master of Science degree, awarded with merit, in Clinical Periodontology at the University of Central Lancashire, and in 2017 Chris was awarded Membership of the Faculty of Dental Surgery of the Royal College of Physicians and Surgeons of Glasgow.
In September 2017, Chris will commence a part-time Postgraduate Certificate in Clinical Education at the University of Aberdeen to help further develop his skills as a clinical educator.

Return to the Meet the Team page

If you have any questions please do get in touch with us today. Your dental health is important and we aim to get back to you as soon as we possibly can.

Send us a message

Your browser is out-of-date!

Update your browser to view this website correctly.Update my browser now