Home » About Us » Meet the Team » Fay Bruce Dunbar 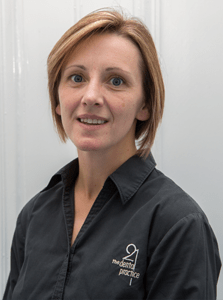 Fay started Dental Nursing in 1994 and qualified in 1997 while working in a small NHS practice in Inverurie. Since joining the team at 21 Rubislaw Terrace in 1997, Fay has seen many changes including Steve Bonsor becoming a partner, an expansion of the practice to provide four surgeries and a larger administration area, upgrading to computers for recordkeeping and a refurbishment of the reception area.

Now only working part-time, Fay enjoys helping out when required, mainly in surgery where she enjoys all her tasks, with a particular interest in orthodontics. She appreciates being able to work in a well-balanced team, where each of the members brings their individual qualities to the mix.

Outside work, she enjoys a busy life bringing up two boys, spending time with her family and playing hockey for a local team.

Return to the Meet the Team page

If you have any questions please do get in touch with us today. Your dental health is important and we aim to get back to you as soon as we possibly can.

Send us a message